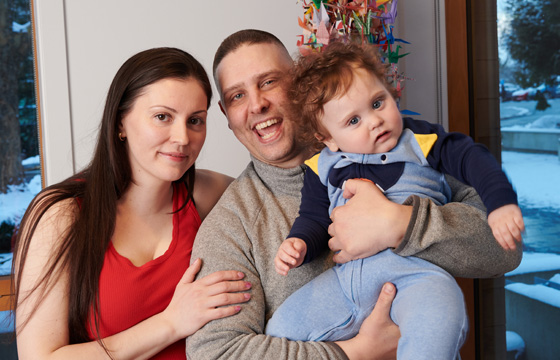 It was a parent’s nightmare. The Kozik family travelled from Castlegar in late December so that their 15-month-old son Noah could see a lung specialist, and they fully expected to be home for Christmas. However, on December 23, their flight was cancelled. Disappointed but making the best of it, they rebooked for December 26, Boxing Day.

On Boxing Day, they found themselves stuck in Vancouver yet again due to weather. That day, they visited a coffee shop, and in what Victoria describes as a terrifying moment, scorching hot coffee was spilled on Noah. He was rushed to the hospital for treatment for 2nd and 3rd degree burns.

Faced with this unexpected emergency, one of their first questions was: where could they stay? A call to RMH BC quickly put their fears to rest: there was a room available and they could check in right away. At the House, the Koziks had everything they needed to take care of Noah and themselves. “It was so welcoming and warm,” remembers Victoria. “I didn’t expect it to be so nice here. It blew me away!”

For the Koziks, Ronald McDonald House helped to reduce their financial burden. As a young family on a budget, Noah’s emergency was a serious blow to Victoria and dad Giovanni. “It was such a stressful time,” she says. “We don’t know what we would have done.”

More than a place to stay, RMH BC became a vital community of support. Programs such as essential oils and massage helped Victoria to unwind so that she could better focus on helping Noah to heal. Family Meals were a huge help, especially with an active little one who doesn’t like to sit still while his parents cook. And meeting friends with children facing so many different medical challenges was eye-opening. “I feel like I’ve learned a lot,” says Victoria.

For Noah, the House helped him to thrive while away from home. Full of energy, he loves exploring the whole House, running around like any other kid. Although they checked in after Christmas, the Koziks were able to visit Santa’s Workshop and pick out some gifts for Noah – much appreciated as they had none of his regular toys with them. And best of all, Noah made new friends.

“When we first got here, he was a baby, and now he’s a toddler,” says Victoria. “He was antisocial before, but he learned how to play with other kids here. Ronald McDonald House helped him grow as well.”

Noah’s treatment is still ongoing but the Koziks expect to return home to Castlegar in March.

Back to our March newsletter