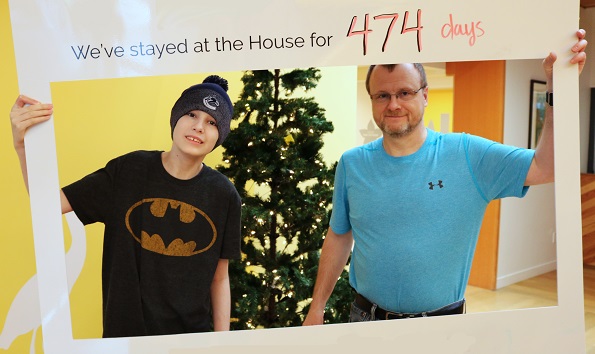 Connor seats himself on the edge of the sofa, directly across from the comforting presence of his father, Eric. He wears a comfortable Canucks toque and both father and son are wearing superhero t-shirts as a symbol of strength. Connor is on the autism spectrum, a little quiet, but eager and happy to talk to us about his experiences.

Connor remembers his first symptoms: “Currently I’m 13, but this all started when I was 11. I’d get up in the middle of the night, get dizzy, and fall over…I’d bump into a lot of things,” he says.

The summer of 2017 was a difficult time for Connor’s family; they were recovering from the loss of Connor’s mother who had passed away after a battle with breast cancer. Then, after a scary moment where Connor collapsed at school, they found out that Connor had a brain tumor that required treatment at BC Children’s Hospital, over 600 kilometers away from their home in Northern BC.

Eric remembers wondering where they would stay, with Vancouver apartment prices soaring to as much as $2500. Also, Connor’s frequent nausea and dizziness would make driving to the hospital each day incredibly tough.

The father and son duo were relieved to find a home away from home at RMH BC, where their financial burden was lifted and they were within walking distance of appointments and treatments. They immediately felt welcomed by the friendly community of staff, volunteers, and other families. Eric found the Family Meals and Grab-N-Go bags stocked by volunteers to be a great relief as they spent their days coming and going from the hospital.

For Connor, the House was a comfortable place to come home to and lie down when he was feeling sick, and a place filled with fun activities when he was feeling better. He would enjoy taking part in the teen program, movie nights and Nintendo nights. “My favourite game is Mario Kart,” Connor recalls, a grin spreading across his face. “Once I was beaten by a kid with no fingers. I don’t know how he did it!” The family also enjoyed the opportunity to attend Canucks games, and Connor recently had the opportunity to kick off a game by cranking the siren with Fin.

With the exception of one trip to Seattle for radiation treatment and a few weeks when Connor was strong enough to travel home, the single father and his son called RMH BC their home for 474 nights, including last year’s holiday season. Connor loved the festive atmosphere and the many trees, including McDonald’s and Lego-themed trees. The hardest part of being in Vancouver was being away from Connor’s 9-year-old brother, Braeden, who stayed back home in Northern BC, and Eric and Connor were grateful when he was able to come to visit on holidays.

After a year and half at the House, Connor and Eric were finally able to return home this month to be reunited with Braeden (and to visit Connor’s favourite local bakery), but they will always be grateful for their home away from home and for everyone who makes it possible.

Thanks to you, kids like Connor and their families have a home away from home for the holidays and beyond. Donate today and keep a family close to care and to each other.